Catch up with all that's going on at Alaska Sportfishing Expeditions in Ketchikan, Alaska.  Covering the week of September 20, 2021.

Welcome back to another Ketchikan fishing minute for the week of September 20th, 2021.

Although we officially hit the first day of fall this week, none of us needed a calendar reminder.

Mother nature was not gonna let us forget it.

Ketchikan receives two and a half inches of rain starting Monday night and through Tuesday morning, as we welcome the new season. 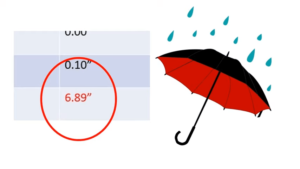 When we say welcome, seeing that the total rainfall for the week just about topped seven inches.

We could have just as easily said, we were drug into fall kicking and screaming.

The thing we love about our guests is that they make the most of their time here chalking up the weather as just another part of a great outdoor experience.

With rain gear and boots and an extra layer of clothes on underneath, they hit the water in full force searching for the last of the fall 2021 coho.

This is typical for this time of year.

We saw a decrease in the number of overall fish caught, as we are on the backside of the run curve. 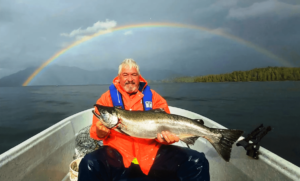 The fish also get bigger the closer to the end of the run.

The average size of the catch increased this week over last week and we saw more large buck males.

Most guests spent the last week fishing down along the wall at Tattoos rocks or near Pup and Betton islands in Survey point with a handful of boat fishing grants or further north.

This week saw only a few boats grinding it out in the southern areas, with most of the guests moving north with the fish concentrating their efforts at Grand island and Indian point.

Some guests that were fishing from thunder jets made the run further north.

Fishing the shoreline between Indian point and Traders cove or even making the run-up to the opening of needs bay, when the weather permitted it.

While guests had to work to find fish a number of nice fish were landed, including a few halibut as guests spent a little time targeting some bottom fish too.

We were excited to roll out our new webcam at Clover pass resort this last week in addition to great live footage.

The camera was a trial run in a plan that will include new cameras at Silver king lodge and the Cedars lodge too. 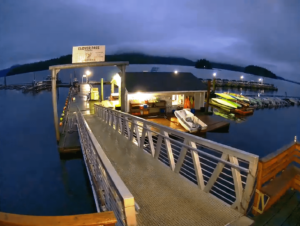 Now that we know we're happy with the setup.

We'll be working on getting the other cameras in place just as soon as we can.

This week we also had the chance to recognize ASE's most tenured team member Now that we know for 30 years of service to the company.

Those who visit the cedars lodge or Silver king lodge have worked with Sid for all these years as she's been the primary point of contact for guests making reservations. 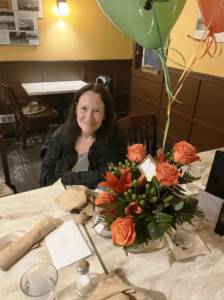 Sid's kind demeanor and loyalty has made her an invaluable team

member and a friend.

At some point in the future, we recognize that we will have to have a serious conversation about sid's retirement but she assured everyone on Sunday night that the party was not her retirement Party.

After 30 years we have wondered though if that conversation might be coming sooner than we wanted it to.

That was until I talked to clover past resort guest Liz chestnut this last week.

Liz called the book her second trip back to the resort after coming up earlier this summer with her 92-year-old dad Gerald Newbold.

The bucket list trip that Gerald had dreamed about was so much fun he wanted Liz to book again for 2022. 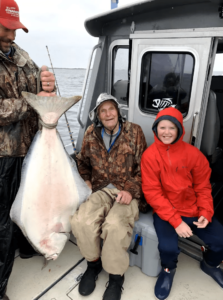 I know a lot of optimistic people but I don't know many as optimistic as a 92-year-old that is making plans a year in advance which then got me thinking.

If Gerald can plan a vacation a year from now at the age of 92, maybe Sid's retirement can actually come later rather than sooner.

We'll be crossing our fingers.

Congratulations on an impressive milestone Sid, we love you.

Gerald, we can't wait to see you again next summer.

There's one week left of our 2021 season and there are still a few trophies out there waiting to be landed.

We'll be sure to be there and catch it all and we'll bring it to you on the next Ketchikan fishing minute.