Catch up on all that's happening at Alaska Sportfishing Expeditions in Ketchikan, Alaska. Covering the week of September 13, 2021.

Welcome back to another edition of the Ketchikan fishing minute for the week of September 13th, 2021.

This last week we said our last goodbye to packaged fishing guests at the cedars lodge, the Martino party including Connie, Richard David, and Deeney wrapped up our 2021 season fishing with Shane Klinger. 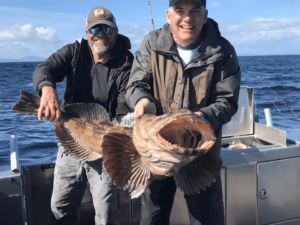 Shane was able to find Martino some nice fall coho, some halibut, and cap things off with this amazing lingcod a perfect way to top our 2021 season.

A huge thank you to all of you who visited us at the cedars lodge this summer. 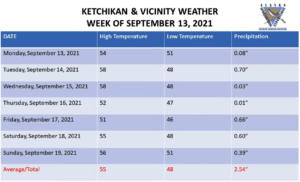 The weather continued to stay cool and wet this week, typical for this time of year.

Average temperatures stayed in the mid-50s like we've seen the last few weeks but the average low at night dipped below 50 for the first week this season.

The slight reprieve we had from the rain last week ended and we saw about two and a half-inch fall this week.

Monday saw the kids out of school for an in-service day and with their mom out of town.

I talked the two girls I still have at home into getting up early and hitting the water with me.

I'm a little embarrassed to admit that I had to blow dust and cobwebs off my tackle box as this was our first fishing outing of the summer.

We headed out from Clover pass and started our drag out near Pup island following the shoreline from the cut between pup and betten up towards tattoos rocks. 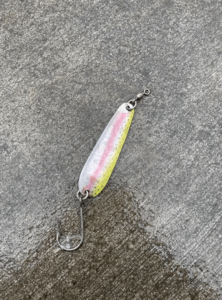 Not having been out at all and not knowing what had been hot lately I went with a mixed bag to see what might attract coho.

I started with a spoon on one rod running that one about 30 feet off the downrigger.

The second rod was running a green and yellow hoochie with a small piece of herring.

That rod was also on the downrigger and set at about 15 feet.

The third rod ran out the back on a deep six diver and was nothing fancy, a straight cut plug herring.

Ally and I were waiting with anticipation for our first strike. Kate was...

Well, let's just say we hoped our first strike might stir her from her slumber.

At the top of the drag near Tattoos rocks we got a heart strike on the rod fishing the hoochie and Ally started fighting her fish while I hauled the downrigger up and got ready to land it. 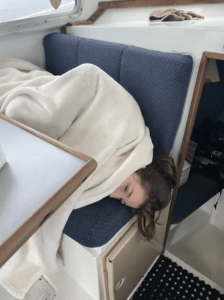 Our hope that the excitement of the first fish might stir cape proved to be in vain, as Ally's hooping and hollering did nothing to wake her sister.

As Ally's fish neared the boat, I realized that my net had been poached and we're going to have to go old school. 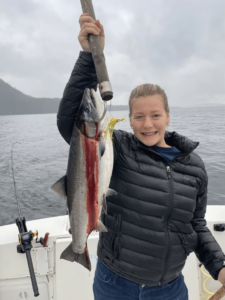 Thankfully, I successfully gaffed Ally's fish without knocking it off the hook and we were able to avoid having to go back to the dock's skunk.

A few minutes later I had a hit and hauled in a second shaker king on the spoon.

Wanting to protect future runs I pulled the spoon off and replaced it with Brad's super bait. 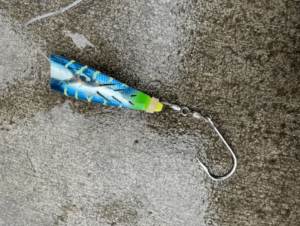 An artificial herring-like lure with a small piece of bait inserted inside to give off a scent.

As we neared the south side of Tattoos rocks and started back along the Benton shoreline I hooked up.

Before Ally could get the downrigger out of the way she hooked up, meanwhile back at the front of the boat. 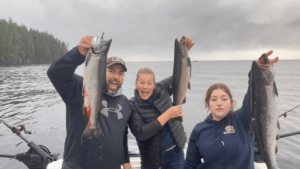 All landed without the aid of a net.

Thank you very much.

Like I mentioned last week, finding the fish is 90 percent of the battle so after our triple header we circled back through the same area and hooked into a doubleheader.

Unfortunately, my cocky attitude with the gaff hook got the best of me and I missed hooked Kate's second fish of the morning causing it to go crazy and spit the hook.

While I was dealing with Kate's fish Ally's fish did a little dance in front of her and spit the hook too.

Although slightly disappointing we did land four fish in our short outing and knowing we weren't the only ones to lose fish during the week took a little bit of the sting away. 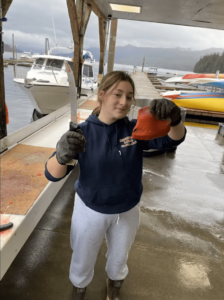 We wrapped up the morning with the girls working on their cutting skills a few more outings and we'll be ready to turn them loose on your fish.

A special shout out to Brett Webster.

Brett and his son Asher fished with us at Clover pass this week and Brett took the opportunity to get some great drone shots of clover pass in the surrounding area. 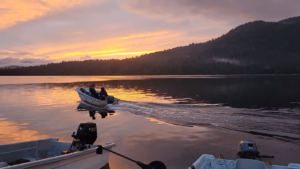 The pictures are an extra reminder that even when catching can be slow sometimes, there's not a more beautiful place in the world for fishing.

Whether you're the person who is sitting on the back deck watching for that rod tip to move or the one waking from slumber to save the day when a triple-header comes along, we want to hear all about it and share it with the rest of you on the next Ketchikan fishing minute.