Catch up with what's happening at Alaska Sportfishing Expeditions in Ketchikan, Alaska.  Week of July 18, 2021.

Welcome back to another edition of the Ketchikan fishing minute for the week of July 18, 2021.

We are excited to announce that as of next week, Ketchikan will once again be hosting cruise ship passengers on a regular basis. 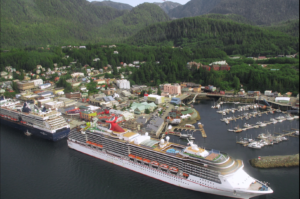 The cruise ship industry plays a large part in the local economy and many activities and excursions that cater to cruise ship passengers.

Also provide ASE guests with all kinds of fun, unique and exciting activities to participate in while visiting Ketchikan.

Including flightseeing, hiking, wildlife viewing, kayaking, and zip lining to name a few. 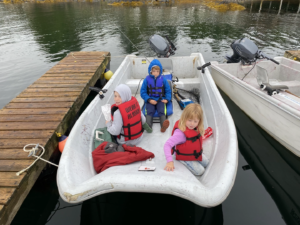 This week's theme was inspired by Oscar's trip out fishing with his three kids Chandler, Parker, and Bailey.

Many of you will recognize Oscar's name from many previous fishing minutes.

As Michael's partner in crime and co-conspirator, when it came to being out of the office and justifying it because they were filming for the fishing minute.

As all young kids do, Oscar's kids have been insisting on recent outings that they just need him to get them out on the fishing grounds and that they're capable of handling things from there.

The first attempt didn't go as well as planned with Parker, who had been assigned to just keep the boat going straight after they hooked up.

Inadvertently giving the 15 horsepower motor a little gas, causing everyone to momentarily lose their balance.

Brother chandler who was waiting to net the incoming fish to inadvertently throw the net in the water.

After the burst of excitement, Oscar not only successfully landed the fish but retrieved the net as well. 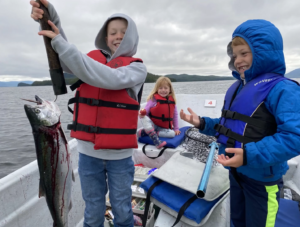 Learning from their mistakes, the kids rallied back, baiting their own hooks, deploying their own gear, hooking, fighting, and landing a fish without assistance from their dad.

If Oscar's kids are anything like mine, their success has now made them believe that Oscar probably doesn't need to even come along on the next trip. 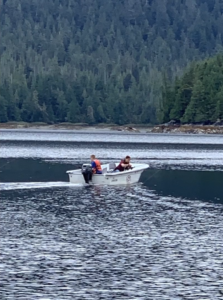 Speaking of not coming along, ASE team members Ian and Lena did go on their first solo outing this last week.

Both of the kids work part-time at the Cedars lodge but occasionally get out to Silver King so they can spend a few hours with Jeremy.

Jeremy's been working on safely operating the skiff and teaching him how to fish.

Ian must have been paying attention and didn't waste any time getting on the fish. 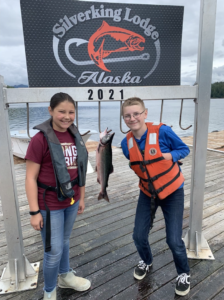 20 minutes later both kids were back on the dock with Lena proudly displaying her first solo catch.

Ian's first successful trip as a charter captain may just put him on a new career path.

Whether you're fishing on your own or with a guide nothing quite beats the thrill of that tug on your line.

The anticipation of what's on the other end and the excitement of seeing your catch hit the deck.

Whether you're 12 years old Lena or the 85-year-old mother and grandmother who is fulfilling her lifelong dream of catching a salmon,   we're excited to share Ketchikan and the three ASE properties with people who are having first-time experiences that will stay with them a lifetime.

Based on experience, we know that many of you who come for a once-in-a-lifetime experience have found ways to recreate that experience year after year as you come and see us again and again.

When you do, we'll be there to capture every smile and every high five on the next Ketchikan fishing minute.