Catch up with all that's happening at Alaska Sportfishing Expeditions in Ketchikan, Alaska.  For the week of August 30, 2021.

Welcome back to the Ketchikan fishing minute for the week of August 30th 2021.

This last week was a mixture of some of the most gorgeous days we've seen all summer and some of the wettest.

While temperatures dropped slightly from last week, they were still pretty typical of this time of year with highs around 60 and lows around 50.

It was the punishing rain on Sunday that tested even the most determined fishermen with more than three inches of rain drenching anyone that dared to venture out. 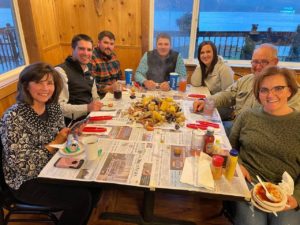 Our guests are a hearty bunch and those who came back for a hot lunch might have stayed just a little bit longer before heading back out.

Those that braved the weather, did some nice fish.

The pinks and chums were almost non-existent this last week and was caught well along the spawning cycle with discolored scales and pinks sporting the large hump in the back. 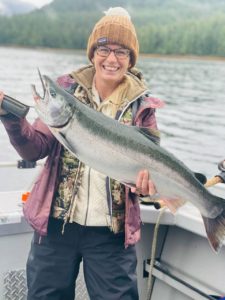 The coho run continued to build through the week as we worked closer to the peak of the run which usually happens in the next week or so.

Fish seemed to be spread out and were rarely seen in large schools resulting in self-guided guests averaging three to four landed coho per day.

Those that did happen across a small school and were able to stay on them particularly around the tide change were able to get their limit.

Guided guests saw limits of both halibut and salmon most days this last week.

The only exception being when rough weather prevented the boats from getting out to the spots where fishing has been best recently.

The morning bite has continued to outperform the evening bite with more fish seemingly eager to feed around the morning tide when the water slows down.

Guests fish in all the typical places fish are found this time of year including Survey point, Pup island, Tatoosh rocks, Grand island, and Indian point.

All areas seem to perform about the same.

Most guests continue to use cut plug herring but some have also been trolling hoochies spoons, bread, super bait and true roll.

Speaking of trolling, we thought we'd take this chance to remind everyone that trolling is just the act of finding the fish once you've found one don't be so anxious to troll away from them, stay in the same area and chances are you'll get some additional hookups. 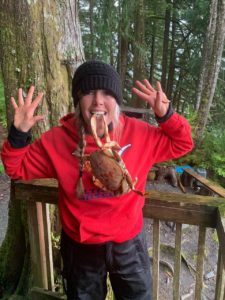 It's pretty typical for our larger groups that come to the lodge year after year to try and sweeten the pot so to speak with a friendly wager or two during the week to keep things interesting.

The guests this week at Silverking lodge were all business knowing the pool winner would have 51 more weeks to claim fishing supremacy in every social media post and group chat exchange.

Tracy Larson was appointed official money collector arbiter and Champion Crowner keeping the spoils safe until they were claimed by Kelly Tuttle with this beautiful 14.5-pound coho. 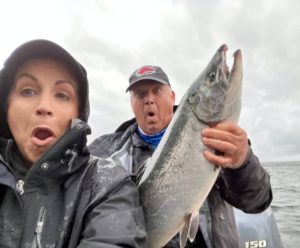 The consolation prize for Kelly's wife Denise and the other participants ended up not being too bad either, a bunch of really nice coho that made their way into the freezer and by now may already be on someone's table back home.

Hopefully, the humble pie Kelly forces everyone to eat for the next 12 months will taste a little better with a side of salmon.

Whether you're atop the leaderboard or watching the tip of your rod in anticipation for the first fish of the day, we can't wait to hear all about it and when we do, we'll be sure to share it with the rest of you on the next Ketchikan fishing minute.