Welcome back to another Ketchikan Fishing Minute. I hit the water on Tuesday this week, fishing from about 7:00 AM through the morning tide at 9:50 AM. My friend Erik and I trolled near Tatoosh Rocks, hoping to get into something other than jack kings.

With July quickly approaching, we were hoping to see some pinks or silvers moving into the waters around Clover Pss Resort. Erik started out with a black and white hoochie, while I fished with a black and white coho killer. I have been using that almost exclusively since the beginning of the season and been having pretty good luck with it.

Right away we got into a school of shakers. They were hitting almost as fast as I could get my line in the water. While I assumed most of these fish to be little kings, I was checking them a little more closely this week to be sure they were not another species. 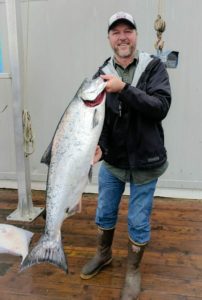 I finally got a strike that was pulling some line off my spool, hopeful that a chinook with some size was on the other end. As it approached the boat, I was disappointed because it was clearly smaller than the 28 inches necessary to keep king salmon. We still netted it just to be sure, and to my surprise, we had landed a nice little silver salmon. Silvers, also known as coho salmon, have white gums and spots only on the upper lobe of the tail, while kings have black gums and spots on both the upper and lower lobes of the tail. 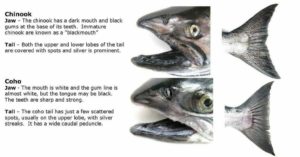 It was encouraging to see silvers this early in the season. Hopefully we’ll see quite a few of those in July, along with the pink salmon we always get during the month.

I will be catching a ride with Captain Shane Klinger out of The Cedars Lodge this week, in addition to doing some more self-guided fishing around Clover Pass Resort. I will give you the report next week on another Ketchikan Fishing Minute.