We’re reaching the end of the 2017 season, with only a week or two to go. The weather has been terrific in September, with clear skies and mild temperatures for most of the month. There is a crispness in the air early in the morning however, indicating that October is not too far away.

I hit the water last Friday with Erik, leaving Clover Pass Resort at about 8:00 AM in one of the yellow boats. That was a bit later than I would usually get out, but still two hours in front of the tide change. I went with the black gold set-up, and within the first hour, I had two nice silvers on board. After that, I didn’t have much action, finishing my day with just the two fish.

Erik fished mostly with a cut plug, but did not have much luck, pulling in just one coho that morning. Overall, the bite was slow that day, with guests at Clover Pass Resort reporting that they too were having a tough day. 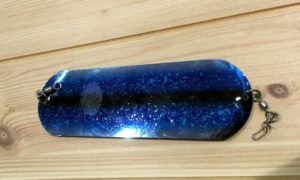 On Tuesday, Oscar and I got back out there in one of the Livingston skiffs. I again ran the black hoochie, while Oscar threw out a cut plug behind a dodger with deep blue color on one side. We trolled from Pup Island to Tatoosh and back, as usual, and before long, Oscar had four nice coho in the boat, while I only had one. I then switched over to a cut plug as well, and saw my luck change a bit. By the time we headed back to the dock, Oscar had his limit of six silvers, while I added another three, including one that weighed just over twelve pounds. 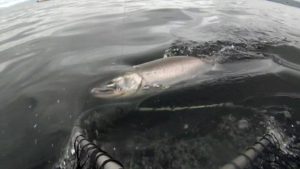 Silverking Lodge General Manager, Jeremy Merrill, was also out on Tuesday, fishing a green hoochie and a blue True Roll lure. In three and half hours, he and his buddy brought seven silvers on board, with most of the strikes coming on the True Roll. 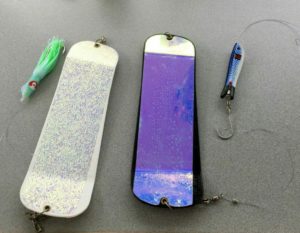 I will be hitting the water again on Friday with Alaska Sportfishing Expeditions General manager Russell Thomas, plus probably one more excursion before next Thursday. I will give you all the details then on another Ketchikan Fishing Minute.