Since the beginning of September, we have had fairly dry, sunny weather in Ketchikan. When the sun is out, the fish tend to run a bit deeper from the surface, making dowriggers more useful than they otherwise would be at this time of year.

Oscar and I took off from the Clover Pass Resort dock on Wednesday in one of the Livingston skiffs, which do not have downriggers. So we both used diving weights to get our bait down a little deeper than we could just using banana weights.

I was using a green hoochie behind a black flasher to start, while Oscar went back to his “Black Gold” set up from last week, again trailing it behind an Abe & Al flasher. 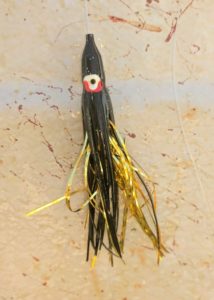 We were on the water about an hour ahead of the 7:00 AM tide change, fishing the area from Pup Island to the Tatoosh cut. Oscar pulled in a silver and I pulled in a pink during that time, but the bite was not as hot as we had hoped. At about 9:00 AM however, Oscar got three nice strikes in a row, pulling in three silvers, two of which had some good size to them.

Around this time, I switched to a black hoochie behind an Abe & Al flasher on a banana weight, and while it was clearly Oscar’s day, I did end up with two silvers and two pink salmon before we headed back to the dock. Oscar finished with five silvers and two pinks as well, giving us a total of seven silvers and four pinks, along with a quillback rockfish. 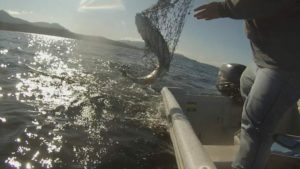 I have no doubt that had we fished the whole day, rather than heading back to the dock before noon, each of us would have hit our limit of coho. Utilizing the downriggers on one of the Clover Pass Resort yellow boats would have undoubtedly sped up that process a bit.

Mostly clear skies with some patchy rain is the forecast for the next week to ten days. I will get on the water a couple more times over the next week and give you the details next Thursday on another Ketchikan Fishing Minute.