We’ve reached the end of the 2017 fishing season, with large groups closing out September at both Silverking Lodge and Clover Pass Resort. The great weather that we have enjoyed for much of September disappeared this week, with wet and windy conditions taking over.

On Friday, Alaska Sportfishing Expeditions General Manager Russell Thomas joined Oscar and I in one of the Clover Pass Resort yellow boats. Almost immediately, a container we were using to brine bait fell overboard, leaving us with just one package of herring between the three of us. We trolled our usual area near Tatoosh Rocks for a bit, marking a lot of fish, but not getting many strikes. Seeing the fish on the depth finder, we decided to try to “mooch” some salmon, dropping our bait down through the school and retrieving it back through – almost like jigging, but through the entire column of water rather than just bouncing off the bottom. After a few minutes of this, we realized the fish we were marking weren’t salmon, but were instead small sablefish. We landed three of those then went back to trolling.

While headed back toward Pup Island, Russell noticed something odd floating in the water – our bait container – which we scooped up with the net. Eventually, I did land two nice coho, but Oscar and Russell were not so lucky – ending the day with only sablefish in the box. 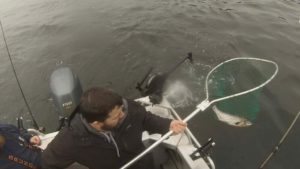 Oscar and I hit it again this morning for a few hours. We took one of the yellow boats from Clover Pass Resort and trolled north. There was very little action, with my only fish being a jack king, while Oscar kept us from being skunked entirely, pulling one nice silver on board before we called it a day. 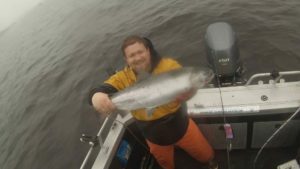 The final groups will depart Ketchikan on Sunday, then the process of removing docks and shutting down for the winter begins. There won’t be a whole lot of fishing for the next few months, but I hope to share some recipes and some fishing techniques periodically through the winter. Check back for those, and check back next May, when the kings start rolling back in, and I bring you another Ketchikan Fishing Minute.