After dealing with record rainfall for the past couple of weeks, we got a break in the weather, with clear skies and temperatures into the upper 70’s this week.

I got out last Saturday with a couple of friends, and we headed to Grant Island to start our day. It didn’t take long for us to pull in our first coho, but overall the strikes were few and far between. So we pulled up our gear and headed to the Tatoosh area. We spent a couple of hours there, bringing in three more silvers, four pinks and a cod before heading back to the dock.

On Tuesday, Oscar and I were joined by his mother, Karen. Rather than head over to Grant Island, we decided to make the Pup to Tatoosh troll our first stop. Oscar set his mom up on a downrigger with an Abe & Al’s flasher trailing a black hoochie with a gold twinkle skirt – what we call an oil slick or black gold set-up. Oscar went with a cut plug behind a dodger on a banana weight, while I used my black flasher and a very small pink hoochie on the other downrigger at about forty feet. I ended up switching to a green hoochie, then to a black hoochie as well, catching one silver on each rig. The bite was steady again most of the day. We were marking fish on the depth finder, with large groups showing up in the coves north of Pup Island and south of Tatoosh. 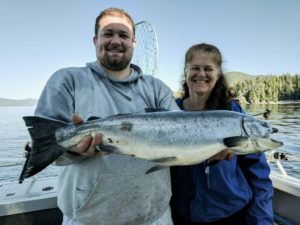 Karen was the big winner of the day however, as she pulled in her limit of silvers along with a chum and a couple of pinks. Oscar and I also brought in three silvers each, and a few pinks, giving our boat a total of twelve silvers, seven pinks and a chum before we headed back to the dock around noon that day. 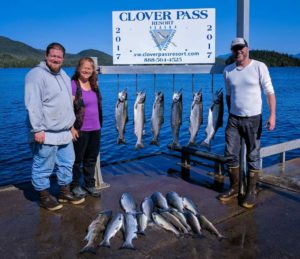 The pinks are really starting to turn color at this point, so their numbers will probably drop off pretty dramatically over the next week or so. The silvers are gaining weight, and we’re seeing more fish over the 10 lb. mark each day. I expect the coho run to peak over the next couple of weeks, but remain strong until the end of the month.

I will get out there a couple more times over the next few days, and give you an update next Thursday on another Ketchikan Fishing Minute.