I spent a few days away from Ketchikan this week, attending a class reunion in Southern California. While I endured temperatures over 100 degrees for most of the week, Ketchikan was pummeled with rain, with over five inches falling on Monday alone.

Oscar and I did end up getting one day on the water however, as we left the dock from Clover Pass Resort on Wednesday morning. The rain had let up somewhat, and the water looked smooth in front of the resort. we decided to run to Bond Bay once again, and did make it across, though it was a much bumpier ride after we swung around Pup Island and headed out toward Caamano Point. 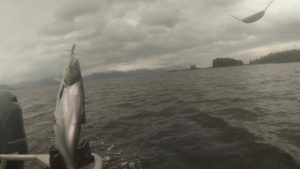 We spent a little over an hour trolling Bond Bay, but only had a couple of weak strikes and did not land anything, so we pulled up our lines and headed to Tatoosh Rocks. We spent a bit of time trolling back toward Clover Pass Resort, and finally pulled in our first fish of the day, a jack king that we released. Eventually we did land a few pinks, a couple of which we threw back, as they were getting pretty ugly. Most of the fish still had a nice chrome color however, which is kind of a surprise, considering we’re nearing the end of August. Typically, you don’t see a lot of pinks this late, as most of them would have already hit the streams to spawn.

We trolled back toward the northwestern point of Betton Island, in the cut between Betton and Tatoosh, when Oscar landed his first coho of the day. Circling over that spot a few more times got each of us one more silver, with mine showing some girth and looking more like the fall cohos we expect at this time of the year. 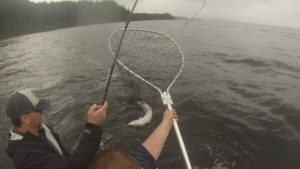 In the end, each of us landed three nice pinks, while Oscar pulled in two silvers to my one.

I will hit the water a couple more times in the next week or so, and give you an update next Thursday on another Ketchikan Fishing Minute.