The great weather we were having came to an end last weekend. Saturday saw the clouds roll in and a steady stream of rain fall on Ketchikan. Oscar and I checked the forecast, and it looked like there was a little break in the weather Sunday afternoon, so we decided to hit the water and fish the area around Tatoosh Rocks.

When we first got out, the weather was pretty nice, with just a little rain and even a ray or two of sunshine. Oscar was fishing on his diving weight, while I was using a banana weight set up. On our first pass through a small cove north of Pup Island, we each got a strike and brought two small cod into the boat, the same type of fish I had caught the week before in Bond Bay.  Upon inspection, it appeared that these fish, like the others, were sablefish, or black cod. Usually these fish run really deep, well below three hundred feet, but we were catching them in the top twenty five feet of water or so. 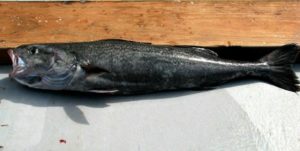 We trolled north for another couple of hours, marking a number of fish on the depth finder, and pulling in a couple of silvers as well as a pink. We circled back to the spot where we were seeing a lot of fish, and Oscar got another strike pretty quickly. Unfortunately, when we pulled in the fish, we found it was a spiny dogfish, one of the more common shark species found around the world. At that point the weather was getting pretty ugly, so we started trolling back toward Clover Pass Resort. Another strike netted another shark, so we called it a day and headed in. On the dock were a number of nice silvers brought in by some of our charter captains.

The weather is expected to stay wet over the next week or so. I will be out of town for a few days, but will get out at least one time before next Thursday and give you the details on another Ketchikan Fishing Minute.