Looking back on fishing in Ketchikan, Alaska for the second week of July. While I did not get a lot of time on the water this week, I was at Silverking Lodge all day on Friday. While there, Silverking guest Joe Bruski brought in a nice twenty pound king salmon. Later that afternoon, there were a couple of kings hanging on the board at Clover Pass Resort as well. It is nice to see Chinook still coming across the dock this late in the season. 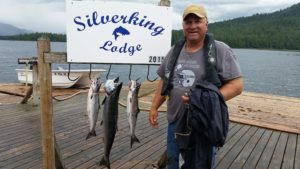 I heard this week was shark week, and I guess that carried over to Ketchikan too. My colleague and I fished from a Livingston on Monday morning for a couple of hours, and got into a swarm of sand sharks. We spent quite a bit of time changing leaders that day, as the sharks kept biting through our line. In the middle of all the shark activity however, I was able to bring a nice Chinook on board, a fish I estimated at about eighteen pounds. Wednesday, we didn’t have much luck at all. I don’t know if the bite got started late that day or if the sharks spooked the fish and they moved to another area. Since we were in the smaller boats, and I only had a couple of hours, we couldn’t hit multiple spots that morning. But the area near survey Point did not have a lot of action. In two and a half hours, the only fish we pulled in was a small, sea run cutthroat trout. Guests at Clover Pass Resort were running to Cammano Point that day and having much better luck. The McDowell family spent last week at CLover Pass Resort and left Ketchikan yesterday with four hundred and fourty four pounds of salmon and halibut between the four of them.

I will be at it again a couple times this week, and give you an update next Thursday. Be sure to tune in then for another Ketchikan Fishing Minute.