Welcome back to another Ketchikan Fishing Minute. The 70th annual Ketchikan CHARR King Salmon Derby wrapped up this past Sunday, and Chase Hanis held on through the third weekend to secure the top spot. His 43.7 pound king was caught early on day five, and that fish will net Chase a $10,000 check in addition to two tickets anywhere Alaska Airlines flies. 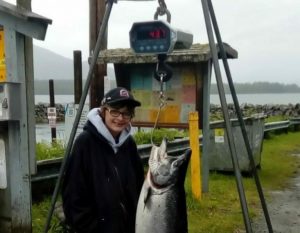 Other notable names on the ladder include good friend of Clover Pass Resort, J.B. Ruth, who ended up with the third largest fish brought in this year. James Shilts won the Silverking Lodge Special Prize, awarded to the angler that turned in the 32nd fish caught overall – in honor of Silverking Lodge’s 32 years in business. Ric Boyd’s 33.8 pound king finished in fourth place on the ladder, but since Ric is a Permanent License Holder and he caught that fish from a skiff of less than sixteen feet, Ric ended up on top of both of those categories. 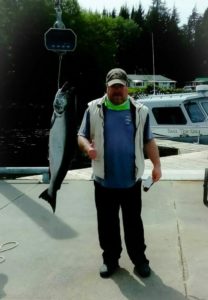 Oscar and I hit the water Saturday, and as has been the case throughout the derby, we pulled a number of shakers up to the boat. Oscar got a fish on the ladder that day when he pulled in a 10.2 pound king. More than nine hundred fish were turned in over the three weekends, nearly 75 fish more than last year. 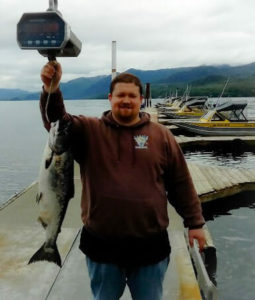 The king run will start to taper off over the next couple of weeks, but we’re already starting to see some coho come across the dock. As the early silvers and pinks start to show up, we’ll be on the water to bring you all the action on another Ketchikan Fishing Minute.