Silvers Show Up In Time For King Derby 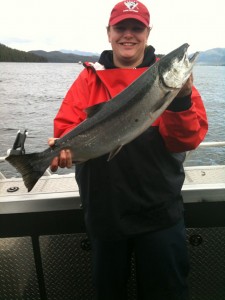 Although most people were out in force looking for kings during the final weekend of the Ketchikan CHARR King Salmon Derby, a southeast storm that came through on Friday night not only stirred up the kings but brought in some nice coho as well.  The third weekend of the derby saw more than twice as many fish turned in on the north end as were turned in during the second weekend.  South-end weigh stations had about the same number of fish turned in both weekends.

The early coho have been consistently showing up around Clover Pass in June, but the coho caught during the derby seemed a little earlier than usual.  In most years, coho start showing up on some of the long-range charter boats the second or third week of June but don’t show up on the inside until the last week of June or first week of July.  And this year’s early-run coho seem to have more substantial size than normal.  Typical summer-run coho average 5-6 pounds, but some fish we saw this last weekend were in the 8 and 9-pound class.

Whatever the reason, we’ll take it.  Not only are coho fun to catch and great to eat, they provide some great rod action during the lulls while waiting for the mighty king to strike your line.