Biggest Silver Of The Year! (So Far) 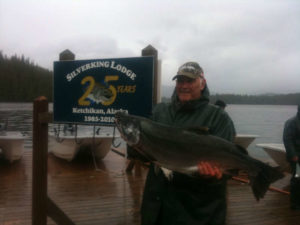 Ron Scott (Enumclaw, Washington) braved the wind and rain and was rewarded with the biggest coho turned into the dock at Silverking Lodge so far this year – an 18-pound lunker! Coho can put on as much as a pound a week as they get ready to spawn.  Anglers that fish later in September often trade numbers of fish for size as the bucks move in behind the spawning females.  We expect to see one or two fish top the 20-lb mark before the season ends but that doesn’t take away from this beauty!  Congrats, Ron!